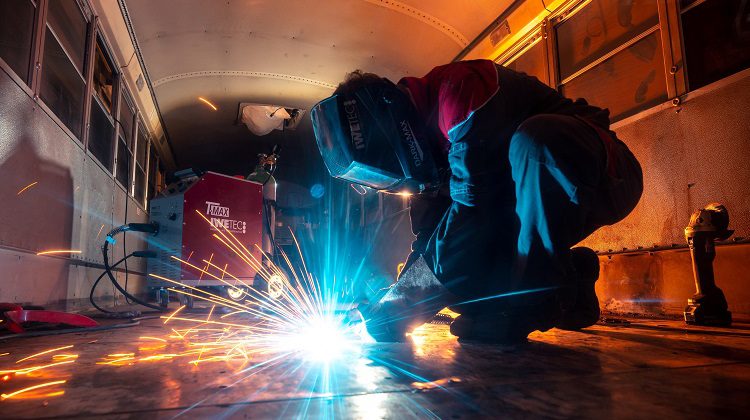 Welding degree program at Northern College ‘…the next evolutionary step’

Northern College is looking to elevate the credentials of its welding techonology students… by offering a three-year applied degree over a diploma.

Vice-President Academic Aaron Klooster days the current course content is already at the same level as other applied degrees.

“And of course these advanced diplomas were created before applied degrees were really being discussed at Ontario colleges,” Klooster notes. “This is, I think, just the next evolutionary step in our welding program at Kirkland Lake.”

If granted permission for the degree program, Northern would still offer one- and two-year welding diplomas.

Dean of trades, technology and apprenticeships David Francis says the advantage of the degree would be more science behind welding and associated trades.

“This would be things like metallurgy, looking at the constituent parts of different metals as they’re joined,” says Francis, “and this allows people to kind of have a bit of a leg up if they wanted to, any kind of aspect of innovation, applied research, perhaps over time a supervisory, more science work that would come from the degree structure.”

Francis adds that a degree holder could pursue graduate education as well.

Welding degree program at Northern College ‘…the next evolutionary step’

Sponsored by the Italian Institute of Welding this IIW Award recognises an individual or team responsible for fabrication of an outstanding recently completed welded construction from the viewpoints of design, materials or fabrication methods. It was awarded in 2019 to Mrs Claudia Pavan and her team from Cimolai (Italy) for the construction of The Occulus. Call for Ugo Guerrera 2022 is being launched, so don’t miss the opportunity. Contact the IIW Secretariat for any question at iiw@iiwelding.org.The Ugo Guerrera Prize 2019 is awarded to Mrs Claudia Pavan (Italy), Project Manager,
and her team from Italian steel fabricator Cimolai SpA who were responsible for completing the complex and unique welded structure of The Oculus, World Trade Center Transportation Hub, New York, USA.
Pavan holds a degree in Civil Engineering from the University of Padova and achieved
her Master degree in Design of Infrastructures at the University of Padua in 2004. She
has worked with Cimolai since her graduation on a range of international construction
projects, becoming a Project Manager in 2011.
The Oculus serves as the main entrance hall to the hub which provides intra-city and interstate transit services for more than 250,000 daily commuters, users and visitors. The bird-like design of the building required an extraordinary level of coordination, detailing, assembly and welding expertise. In addition to complex joints and
welding details, the main challenge was to fabricate the elements within a tight tolerance. As most of the elements were three-dimensionally curved plate steel, a detailed study was performed to defi ne the shapes and establish appropriate tolerances. The welding fabrication was completed with the highest level of commitment and quality.